I recently had two minutes to prepare a one minute speech about my leadership style. That forced me to concentrate on the key elements of being a great leader. I talked about the importance of showing the way instead of pointing the way, as well as the importance of causing order-of-magnitude impacts versus incremental improvements. But it got me thinking: what is a truly great leader?

I’ve written in the past about a few of the attributes of great leaders (see: The 4 Principles of Great Leader-Chefs), but that’s a little different than exploring what it means to be a great leader. Why bother talking about the definition of leadership? Two reasons. First, we all spend most of our lives following others, and need to be able to discriminate between the truly great leaders and the mediocre ones. Second, I find that it’s common for people to talk about what a great leader does or how one acts, but far less common to talk about how to identify one. It’s all too easy to mistake someone who merely looks like a great leader for the “real McCoy.”

A simple image search for leaders vs managers will show you all kinds of attributes for leaders. One of the most common lists that’s floating around the web says things like, “A leader coaches employees, depends on goodwill, generates enthusiasm, says ‘We’, gives credit, asks, says ‘Let’s go’, shows the way, ” etc. These may be enabling attributes for being a great leader, but they are not sufficient. In other words, a manager who does all these things may still not be a leader, much less a great leader.

Here are a couple of definitions of a leader, one from me and one from Daniel Goleman:

There are two key elements in both of these definitions: influence and change. We can synthesize these elements to make the definition a little more concrete:

While it is commonly a very effective technique for a leader to personally take direct action towards the goal (showing the way), it is by no means necessary. That is more about the how of leadership, not the what. There have been many leaders throughout history that made their imagined realities real by simply convincing others to take action. The key element is that the leader convinces. He or she imagines or discovers a new reality, and then convinces others to make it real.

Thus, unless you are instrumental in turning a new idea into reality, you cannot really call yourself a leader. Success as a leader depends critically on this ability to innovate. In a recent talk, Astro Teller defined true innovation as that which results in order of magnitude improvements (10X instead of 10%). Similarly, Clay Christensen distinguishes between disruptive innovation and sustaining innovation. In both cases, these are just two points along an innovation continuum, one which I suggest is the same continuum we should use to evaluate leadership.

A Matter of Effect Size

If a leader influences people to cause change, an unusually effective leader is arguably one who:

In other words, the greater the influence and the greater the change, the more effective the leader. I smell a “quadrant diagram” in our near future, but first we need to talk about how to measure change and influence.

One could be tempted to measure change in terms of the number of people’s lives that have been positively and significantly affected. While this is important, it can’t be all there is, as it confuses leadership with positions of power. In other words, just managing a large organization that wields a lot of power doesn’t make one a leader.

Instead, to measure change, we need to measure the amount of change. What did the leader start with, what was the endpoint, and what was the delta? This is a concept that is familiar to nearly anyone in business, finance, or science. Yeah, you made a million dollars, but if you started with a billion, that’s not quite so impressive. This goes back to Teller’s innovation definition, which at its core is one of relative magnitude (10% versus 1000%). So measuring change is about looking at the relative differences.

Measuring influence is a bit harder. It’s fundamentally about change as well, but specifically about changing people’s minds. While it’s important in measuring a leader’s influence to look at how many people’s minds have been changed, it may not always be the case that the leader changed them directly. Instead, and more likely, they changed the minds of people in powerful positions, who in turn convinced others to make the change real. In other words, the truly effective leaders multiply their influence through its carefully selected application. This is one reason why upper levels of management are sometimes called the “leadership team.” They have the ability to “convince” (through direct edict, if necessary) their whole organization to take a certain path. However, this doesn’t, of course, make them leaders, since they may or may not use that ability to effect large change, and to the extent that they enforce their will instead of convincing others, they also fail to be leaders on the influence dimension.

You can visualize all of this in the following quadrant diagram: 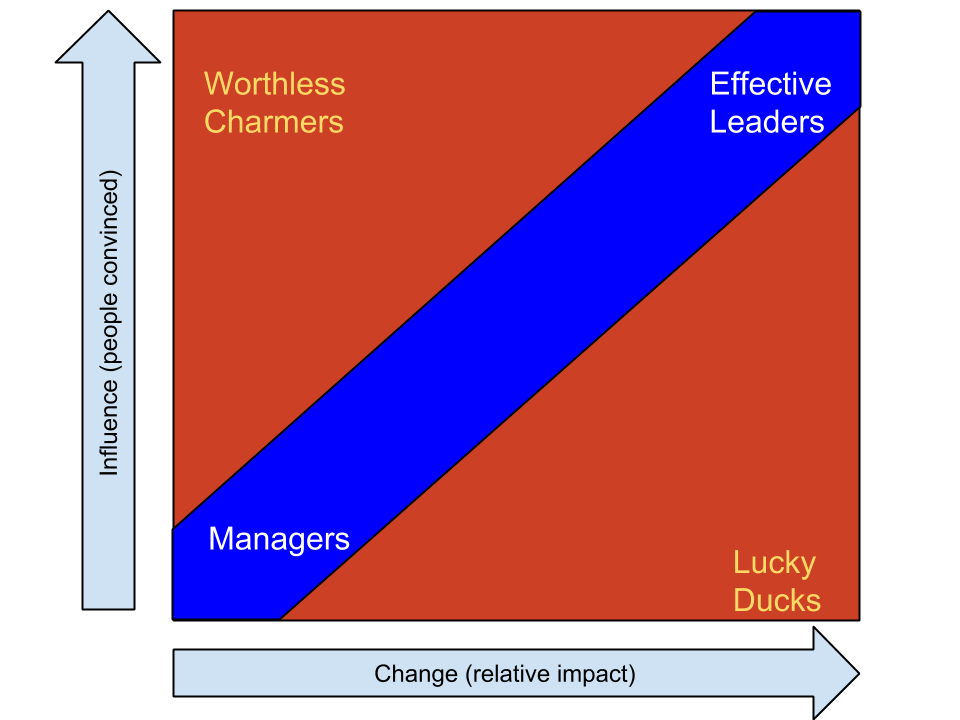 In the lower left, where relative change is small and the use of influence is also small, you have managers. As these two dimensions grow, a person can also grow into an effective leader. But one has to beware of the people who may look like leaders superficially – the lucky ducks and the worthless charmers. The lucky ducks are the people who through luck or judicious leverage of circumstances, are able to make large changes, but not through the use of influence. These folks should not be dismissed out of turn, but also should not be confused with true leaders. Likewise, the worthless charmers may seem to wield a great deal of influence, but somehow never accomplish anything big.

Somewhere along the line here, I stopped talking about great leaders and instead focused on effective leaders. Someone can be an effective leader, without being great. For example, Steve Jobs, while possibly the most effective business leader of our time and someone who affected the lives of nearly everyone in the developed world through his exceptional gifts of vision and charisma, was nevertheless arguably not a truly great leader. He was notoriously hard to work for, demanding, and some even say demeaning. These hardly sound like characteristics one would associate with being great. And Jobs isn’t the only well-known and successful leader to fall short in this way.

What’s the missing third dimension, the thing that distinguishes an effective leader from a great one? In the words of John Hamm in Unusually Excellent, it is character: being authentic, trustworthy, and compelling. It is, as Jim Collins says in Good To Great, humility. Simply put, it is the quality of the leader’s core values and how well they live them. So, in the end, the how does matter. Influence and change can make an effective leader, but how a leader achieves these goals is what makes the difference between an effective leader and a great one. 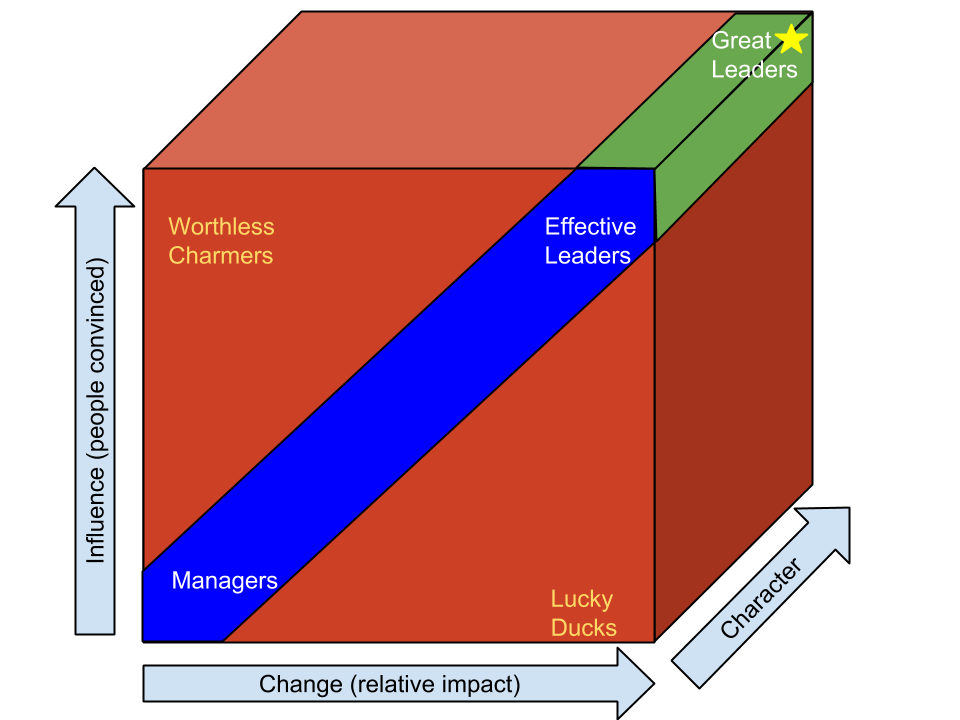 The title of manager is something that is bestowed, whereas the title of leader is earned. Being called a leader is a way of being recognized for actual accomplishments. I like to think of leadership as a badge, one which is earned and which if not continually renewed, eventually expires. It can be bestowed by anyone on anyone else, and ideally should be the result of exhibiting high levels of influence and relative change, while living one’s values. Paradoxically, the higher up in an organizational hierarchy one goes, the harder it becomes to exhibit true leadership – the starting point for measuring change is bigger (so the delta becomes more difficult to enlarge), the ability to exercise true influence likewise becomes more difficult, as the person begins to rely on their position of power to change people’s minds, and staying true to one’s self gets harder and harder as the pressures of managing a business or organization get overwhelming.

Take a moment and think about the people you are following. In other words, who is it that influences you and inspires you to action? This may or may not be someone in your formal management chain. Take a moment to evaluate them – what is their vision, have they delivered large-scale change through their influence, and do they live by their values? In other words, would you give them the leadership badge? Would you give them the gold star “great leader” badge? Maybe they haven’t earned it yet, but do they at least have a good chance to earn it? If not, shouldn’t you be following someone else?

Now take a moment to think about yourself. Regardless of whether you want to be a leader of others (as only few can be), we all should be leading ourselves in our own lives. Are you actively trying to change yourself for the better? Are you challenging yourself to improve? Are you staying true to yourself as you do it? In my next post, I’ll write about a particular technique I use to help me stay on track and always improving…stay tuned!

I’d like to acknowledge the following article, which helped inspire the writing of this post: “Management is (Still) not Leadership” – Harvard Business Review.